"Where Creativity is a Custom" 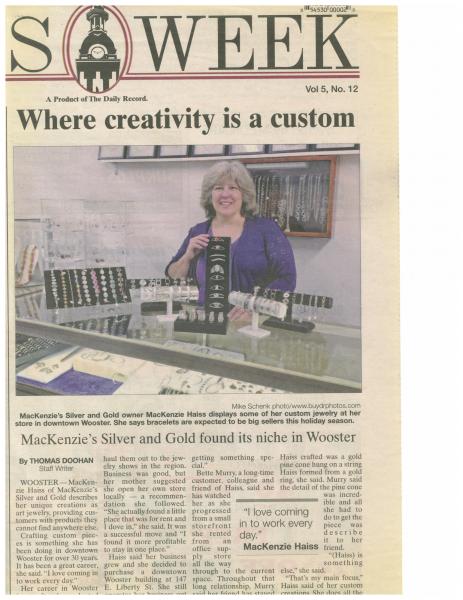 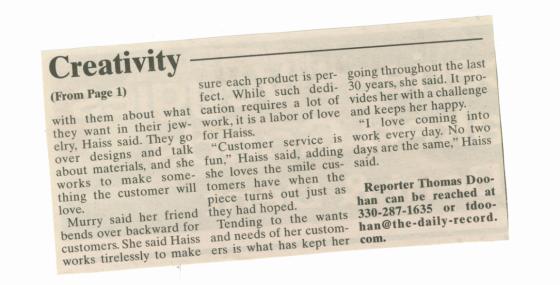 Mackenzie Haiss of Mackenzie's Silver and Gold describes her unique creations as art jewelry, providing customers with products they cannot find anywhere else. Crafting custom pieces is something she has been doing in downtown Wooster for over 30 years. It has been a great career she said. "I love coming into work every day."

Her career in Wooster began after she graduated from Ohio Wesleyan University in 1979. She said she received a bachelor of fine arts degree in metalsmithing and quickly put her degree to work.

Haiss she started crafting pieces and would haul them out to the jewelry shows in the region. Business was good, but her mother suggested she open her own store locally- a recommendation she followed. "She actually found a little place that was for rent and I dove in," she said. It was a successful move and "I found it more profitable." Haiss said her business grew and she decided to purchase a downtown Wooster Building at 147 E. Liberty St. She still operates her business out of that location and said the jewelry crafted in the space retains the same artful-integrity it had when she first set up shop.

"I don't do any mass production, " Haiss said. "Everyone feels they are getting something special."

Better Murray, a long-time customer, colleague, and friend of Haiss, said she has watched her as she progressed from a small storefront she rented from an office supply store all the way through to the current space. Throughout that long relationship, Murray said her friend has stayed true to her custom art jewelry.

Murry recalled how time after time, she has brought an old ring or necklace and Haiss would melt it down and create something new. A favorite piece Haiss crafted was a gold pine cone hung on a string Haiss formed from a gold ring, she said. Murray said the detail of the pine cone was incredible and all she had to do to get the pice was describe it to her friend.

"Haiss is something else," she said. "That's my main focus," Haiss said of her custom creations. She does all the metalsmithing and hand pick each gem and stone used in the pieces. A customer comes in and she starts a conversation with them about they want in their jewelry, Haiss said. They go over designs and talk about materials, and she works to make something the customer will love.

Murray said her friend bends over backward for her customers. She said Haiss works tirelessly to make sure each product is perfect. While such dedication requires a lot of work, its a labor of love for Haiss.

"Customer service is fun" Haiss said, adding she loves the smiles customer have when the piece turns out just as they hoped. Tending to the wants and needs of her customers is what has kept her going throughout the last 30 years, she said. It provides her with a challenge and keeps her happy.

"I love coming into work every day. No two days are the same," Haiss said.